PinkDot TO is a non-profit movement originating in Singapore by a group of individuals who care deeply and support the belief that everyone deserves the freedom to love. While we are fortunate to have marriage equality in Toronto, LGBTQ+ Asians in Toronto still face many challenges. Queer Asians are often under-represented or sometimes seem non-existent in the Asian and LGBTQ+ communities. With little visibility, it is harder to know where there are safe spaces for queer Asians. We also invite straight allies to show that there is support and love in our community for queer Asians who are still trying to find a place where they feel comfortable to be themselves.

In an effort to break the community silence and to showcase family support for Asian LGBTQs, #PinkDotTO will bring together queer Asians and their allies to wear pink and march through downtown Toronto to show love and support for Asian LGBTQs. #PinkDotTO is about actively creating a much-needed community space where queer Asians can feel comfortable to be themselves, increase visibility of their existence, and garner support from the broader community. The event is open to all—gay, bi, queer, trans, straight and allies—those who believe that everyone deserves the freedom to love.

Pink Dot is a movement started in 2009, in support of the Lesbian, Gay, Bisexual, Trans and Queer (LGBTQ) community in Singapore. Attendees of the Pink Dot events gather to form a giant pink dot in a show of support for inclusiveness, diversity and the freedom to love. Pink Dot has inspired many around the world to show their support and love for LGBTQ communities. International Pink Dot events have been held in Anchorage, Hong Kong, London, Montreal, New York, Oklahama, Penang, Kaoshiung, Utah. The first PinkDotTO , held in the format of a LGBTQ + Allies Chinatown Pride March, was held on May 24, 2014 in Toronto during Asian Heritage Month as a lead up to the World Pride Human Rights Conference and World Pride 2014. 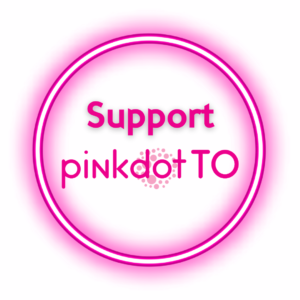